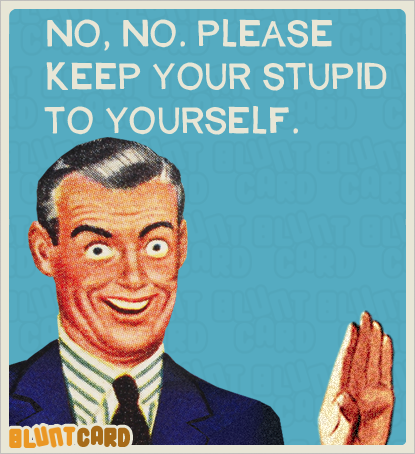 Being Dumb on Social Media. This is and will continue to be an HR and PR thing.

How it works: Someone is dumb on social media, posts something offensive. Said post catches eyes; public shaming and hand washing; someone gets unemployed. PR trying to fix stupid.

ICYMI: Someone was (awful) dumb on social media.

In making her (appalling) beliefs about gun control and the failures of government known, a woman expressed a (horrible) lack of human compassion regarding the tragic Las Vegas shooting. Her employer CBS said it violated some fine print clause that no job candidate ever reads when signing on the dotted line; she was fired.

FTR: This is a First Amendment issue. This is a Social Media issue. And it is a human issue, the idea of having and expressing opinions. Since a brand is made of its very human resources, it’s also a business issue.

These ‘dumb on social media’ actions; likes, shares and posts reveal the character of employees that, traditional employment interviews and HR vetting do not.

Spoiler: You work with [bleeping] [bleepers] who [bleep].

You have conferences and meetings with them. You work with and for racists, sexists, trolls, hateful, poly-phobic [bleeps]. Everywhere, everyday. You just don’t know it.

Or you do and can’t speak up. Maybe you work for a sexual predator, who uses their position of power and web of connections to get away with being a POS – Ahem.

So my question is this: is it being (horrible, appalling, disgusting) dumb on social media? Or being caught?

I tweet dumb and so far, blessed not to be caught, nor publicly shamed for it.

Click any story, any social media platform and if there are lots of comments, there is OMG terrible. Is it using social media on the clock (or not), or some violation of their employer’s social media policies? Probably. Is it a de facto fireable offense? I don’t know.

Questions I ask: should one bad tweet = lose everything? Does someone’s personal SM asshattery always make them a terrible employee? Should a business always fire? Or should HR consider the employee – and their dumb on social media actions – as a whole? Revisit the trainings and teachings, workplace and SM policies, hiring and recruiting practices?

Agree, disagree? Let’s try to not get fired.