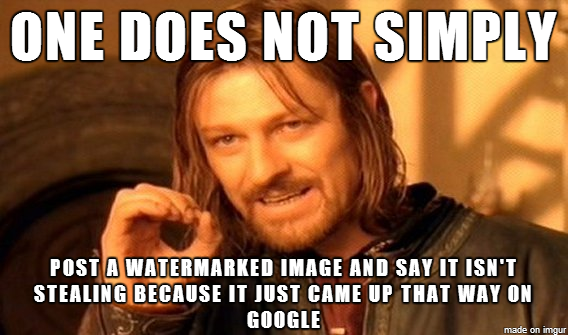 Stealing aka taking something that’s not yours. We learned that as kids, seem to have forgotten it as adults and business ‘professionals’ – especially regarding creative ownership.

But it’s on the Internet. [Said in grating whine.]

It’s one thing to be inspired by someone else’s work, then use that inspiration to create something uniquely your own. To flat out copy it, clone it – I’m not here for it.

Everyone Does It. [Said in even more grating whine.]

Posting someone else’s work without attribution, that may be the social media way. It’s also stealing. Isn’t it?

Facebook posts, tweets and retweets, so SO much Instagram is often someone else’s first. Any meme or video on the Internet, it’s somebody’s creative effort. It can be a challenge to find the source; seemingly few try to really find and/or credit ye of whoever made this?! fame.

The idea that you have to tell a person how taking a screenshot of another account’s post, rebranding it with their watermark is unethical and wrong, I really can’t even. Having the “but it’s on Google” debate with anyone trying to profit from taking someone else’s work, beyond the pale.

Second only to the whataboutism excuse is the rationalization that internet theft, usurping creative ownership isn’t hurting anyone, a victimless crime.

Those designs and comics for purchase, those photos in a stock library are someone’s livelihood. Respect that. The turn of phrase that makes all the difference in your slide deck, use it – with permission, credit. It’s on the Internet, cite your sources with proper links.

I can do better.

It’s as though social media and the ease of posting whatever, whenever has softened our integrity, the ethics of creative ownership. And I can do better.

I give credit for memes, attribute posts, stories, tweets, pins. Instead of ‘liking’ someone’s Instagram screen capture of someone else’s clever tweet, I go to Twitter and give that person a proper like or retweet.

As a creative professional, that is who I am.