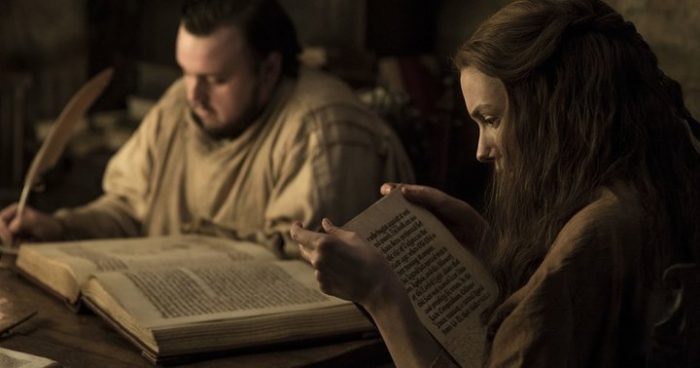 Taking credit for someone else’s work, taking advantage of one’s position to demand work outside a subordinate’s scope, using one’s position of power and control for unfair advantage – that’s the Game of Business.

Is HR is useless, powerless to do anything?

Working at Game of Thrones, Inc.

I’m still bitter about that craptastic Thrones season finale and news that HBO wants more of my time and money for a GoT  prequel. Which brings me to Sam Tarly and two bones to pick (SPOILERS, duh):

ONE: A frustrated Sam speaking over Gilly as she was dropping (confirming) some Big Revealing OMG NEWS. That happens, we don’t pay attention all lost in our own thoughts. HR infraction: Minor.

Also, I'd like to call out one Samwell Tarly for taking full credit for Gilly's discovery. Most realistic thing on #GameOfThrones

Much like Jon Snow getting credit for a win that he’d have lost without Sansa, it’s garden variety sexism in the workplace.

(Side note: In a show formerly known for good writing, it was lazy and dumb writing, creating a somewhat out of character moment for no reason. Replace “I” with “Gilly” to tweak the line and it’s fixed, SHOW. Ahem.)

Bad leaders create cultures where taking credit is allowed, where those in power – statistically, more men – can easily, without fear of consequences, manipulate and control those who aren’t.

While I haven’t had someone mansplain my own theory to me, I have been there. SO. MANY. TIMES. (FTR: I’ve also had credit and advantage taken by female supervisors. There’s an EPIC standout from an early internship, I’ll have to share someday. Yeessh.)

I’ve felt powerless to do something, like I had no choice. The minute you make something a thing, it’s a thing. The second you mention favoritism or unfair treatment, it’s a thing. You’re a complaining complainer, a whiner, someone bringing a problem with no solution.

And that’s why Human Resources cannot serve two masters, the business and the employee. It’s why there has a be an independent Employee Advocate (and ideally, a CEO) who puts people first.

I’d love to be that HR Employee Advocate. I’d use my PR, communications and relationship building skills to create a more positive culture, one that protects and supports the employees – the people who make a company better.

What would you do, HR?

At the Emmy Awards, the 9-to-5 reunion made a valid (and politically charged) point referencing the movie’s credit-taking villain: in 2017 we’ve come almost nowhere, baby. See also: The Google Manifesto.

Turning back to my Game of Thrones riff, Sansa Stark is obviously a capable leader. Yet she still has to speak up for herself to get her proper credit, then face the criticism when she does. If Gilly were to report Sam to HR or management for taking credit for her work, I wonder what that reaction would be.

Dear HR: If Sam were your employee, what would you do?