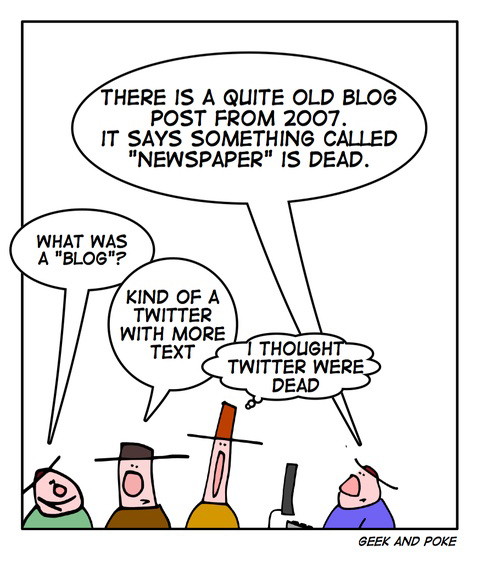 Founded in the mid-aughts this former SxSW standout is going the way of MySpace and other social networks before it, shutting down its services last Sunday.

The 140-character micro-blogging service, once popular with social media marketing types, Twitter never quite caught on with the rest of the connected world.

Cause of death – heavily debated among industry experts, insiders and other ne’er-do-wells – has been attributed to complications from unrealized potential and a questionable business plan, outmoded monetization strategies and failed expansion of the primary service itself.

Its 200+  million users will be inherited by:

No flowers or donations are requested, as owners should have plenty of VC money squirreled away somewhere.

Gini Dietrich casually commented that she wants to find other ways to engage and build blog traffic because she thinks Twitter is not long for this world.

“I believe Twitter is going to die an untimely death and then I’ll be stuck with a loss of 30 percent of our traffic overnight.”

Damn! I like Twitter, think it’s a little soon to pull the plug but in its current form, Twitter needs to improve to survive. If the #1 tip on how to use and get the most from your product or service is to in fact NOT use YOUR product or service, you have a problem.

Casual users may be fine with the web interface, but power users – in theory, where the money is – are using TweetDeck, HootsSuite, anything but ‘real’ Twitter.

How do you build on that when it’s others adding usable form, function, and therefore value? And if everyone’s going around you, how do you cash in and start making some money?

Some of the latest moves – upgrades to a new web interface; Tweetie as ‘official’ iPhone app, trying to stop the proliferation of coattail-riding 3rd-party apps; the possible acquisition of TweetDeck (whether it’s good or bad); are all steps in a direction, probably the right one.

Show me the money

Its user base may be smaller than other networks and its growth slowing, yet former haters are now feeling the like; Twitter has SOMETHING. There’s gold there, just have to figure out how to mine it.

The selling of eyeballs. Companies make money giving away free iPhone apps selling ads most of us ignore. Can’t remember the last time I paid attention to an ad on YouTube, other than to reduce it out of my way. Not sure I’ve ever deliberately clicked a FB ad, but theoretically these all make someone some money.

Pay to Tweet? How do you scale that, like some smartphone data or texting plans? I shudder at the thought. Maybe I would pay, but no.. not when there are serviceable free alternatives. I’m cheap.

Twitter Pro. For us industry types, increased functionally –  backend stuff like analytics – might be worth the buy-in. Would that hurt the SMB marketers, a big chunk of its ‘customers’? Maybe there will be Free, Basic, Pro and ProLux levels, where only global brands can afford the Twitter: Fully Loaded edition.

Clearly I don’t have the answer, much less a crystal ball b/c if I did I’d have done won the lottery. I think it’s too soon to call time of death, but without making some money soon… maybe one foot in a shallow grave, the other on a banana peel of untenable strategy.

You tell me, do you see Twitter going gently into that good cyberspace sky?

Photo credit: Love how the Geek and Poke comics are a few years old. Heh.