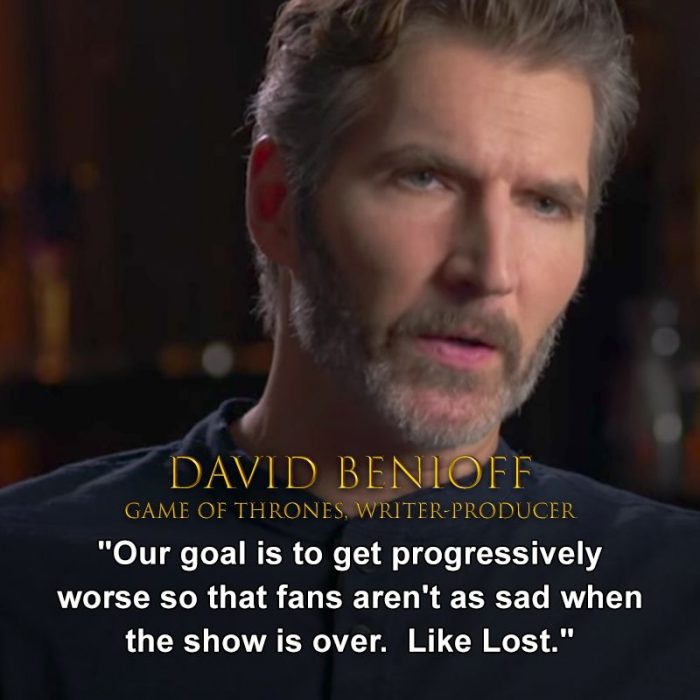 There are no shortcuts in good writing.

“Warm up on your own time,” taught one of my college professors and I’ve appreciated efficiency in story telling (and good writing) ever since.

Turning Game of Thrones into a Business Blog Post. Part I.

I’ll type what should need no typing: SPOILER ALERT.

I’ve been obsessed since the WTH-was-that?! Game of Thrones crappy, predictable season finale. YMMV, but the Twitterverse knows who shares my bitter disappointment.

Some of the more damning criticisms I’ve read: in their haste to make the story fit the fanfic wants of the viewers, the writers lost how to develop their best characters and produced the show’s worst season.

One of the big “surprises” (that everyone I know saw coming) was those Meddling Stark Kids vs. Littlefinger. For a character so in tune with the other players, Littlefinger missed the light bulb over Sansa’s head as she reached the very conclusion he wanted. The catch: she knew better – as did much of the audience, because they understood the people involved.

It’s the same with HR, PR, with business. Knowing your employee and what drives them helps you motivate, manage, promote. Understanding people helps you communicate effectively, which is essential to business.

Offscreensville: Where the Good Stuff Happened.

In business you have ‘leadership’ styles vs the way things really are, decisions made unilaterally and behind closed doors. Think of a brand who talks about its award-winning, but does little earn it. HR hires the best resume instead of the right person. PR writes a clever mission statement is a substitute for company culture.

Good Writing, When Every Word Counts.

Can we talk about Brienne and the Hound acting like an amicably divorced mom and dad co-parenting Arya, their Murder Baby #GameOfThrones

Loved that scene – real, human, and took only a brief moment to tell a good story.

With only Six. Episodes. Left. the Game of Thrones team needs to stop padding the show with meaningless, trailer-friendly visuals and CGI glamour shots. Most importantly, they need to stop with the shortcuts and get back to writing (and SHOWING) a good story. They’re on our time now.

So … a bit of a stretch; Part II is a legit HR post about Sam.

Loved it? Hated it? Do tell.