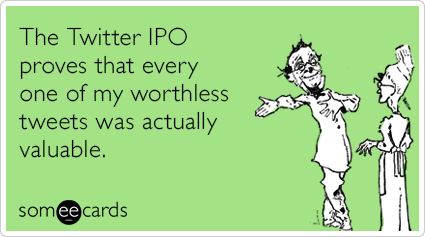 Salesforce has passed. Disney, other businesses have bowed out of the ‘who wants to buy Twitter?’ lottery.

I once dated an apostrophe. Too possessive.

I’ve written it’s obituary, opined what I want from MY Twitter, and I keep coming back to this:

Twitter is many things to many people. Don’t fix it USE it – make Twitter a safe, friendly, useful destination unlike other social networks.

FWIW this petition to sell Twitter to its users makes smart points about who, what Twitter is.

Twitter’s problems are known: its failure to stop online abuse is epic – and HUGE roadblock to any sale; the stagnant growth, limited use; the massive noise to signal ratio that makes it harder for new users to ‘get’ it.

From a business standpoint – growth, development, money – I think Twitter has become a delivery system, not a social destination.

Powers to the People

Let users make their own version of Twitter, so they get out of it what they want.

I deeply regret most of you.

I still say I have met more new, different people on Twitter than anywhere else. And if they could solve that, connect people from the moment they sign up, then Twitter would have something.

What do you think: is Twitter worth saving? How?