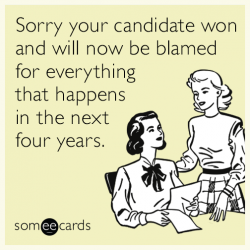 I don’t support violence or destruction, ever. Unless you’re trashing Bieber CDs.

I don’t usually politics or any ‘one bad tweet’ hooey that blocks my dream job of drinking wine, traveling the world, watching TV and somehow getting paid for it.

After a lot of caffeine and chocolate and reading, I don’t think this is the end of the world. Why? Because I believe – in people.

The West Wing‘s first season dedicated a big arc to putting a non-Washington ‘working person’s’ judge on the Short List (for the Supreme Court). Another very special SCOTUS episode they did a BOGO, going with extreme conservative AND an uber liberal, both with amazeballs brains. Thanks to Glenn Close and William Fichtner, it was balance and beauty and brilliance. Other times they reached across the aisle for ideas and cooperation. Alas it was all TV, no way it could happen IRL.

Ahem, bets be off now. This President-elect doesn’t have to follow the script. That has potential, possibility. Like go crazy, hire smart people with a range different views from outside the usual suspects of cronies and politicos. (Section edited to edit, delete. See also: News.)

Lots of smart ‘what went right/wrong, what could be, what happens next’ posts out there, to which I can’t link lest they be too blue or red. (Purple is my color.)

Forward is the only direction, keep it going. Unless this lapse in judgement and/or sanity bites back, comments open.