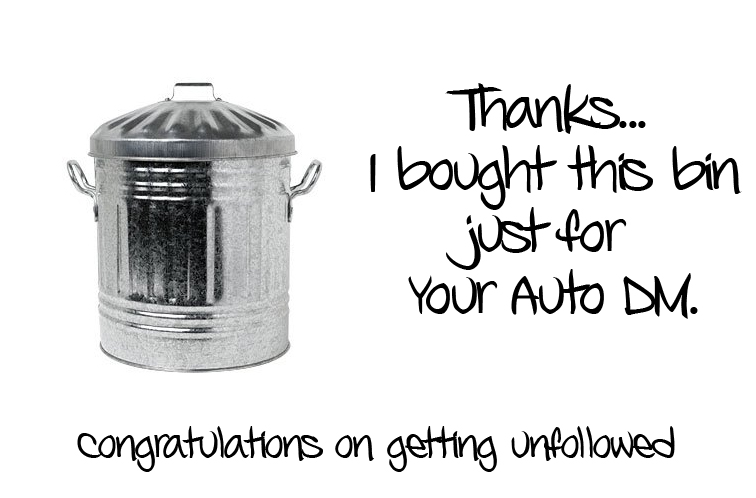 Twitter auto-DMs are the vile, putrid crap regurgitated from the flaming bowels of the Internet hell to wreck havoc on unsuspecting tweeters whose only sin was following in the first damn place.

It’s not just ME

Really, I ain’t alone in my dislike for these. In fact I’ve collected a few ‘Die Auto-DM, Die!‘ memes in my time here on the Internets.

Behold, the Gospel according to:

Augie Ray. He conducteth scientific research, with numbers and everything.

“Think of it as a Twitter intervention: If a sufficient number of people care enough to cure the senders of Auto DMs of their bad habit, we can make a dent in those annoying generic messages.”

Lisa Gerber. She ranketh them worst amongst her peeves.

“When I follow you on Twitter, and immediately get an auto direct message asking me to friend you on Facebook or visit your website, you’ve just turned on the ICK factor, and I’ve hit the unfollow button.”

Sean McGinnis. He weepeth for what makes the Internet cry, such as “overly pious dipshits.”

“.. this practice is spammy as hell.  To my way of thinking, the auto DM serves no real purpose. It has been adopted by many Social Media Gurus and other wannabes within the Twitterverse and it drives me absolutely insane.”

Raul Colon. He shareth great examples on getting to know followers rather than spamming them.

“No matter how you want to justify your Auto Dm’s they are defined as Spam. They are not requested by your new followers and it is kind of going against the trust this person just gave you by following you.”

Heidi Cohen. She knoweth they are cold, impersonal and self-promotional crap.

“The reason that this is a social media #fail is that it’s the opposite of how to engage in the social media ecosystem. While it appears to be helpful, it’s all about you. Who wants to join a social media tribe only to be immediately assaulted by a promotional harangue?”

“Sign below in the comment form if you dislike Auto DMs. Steal the logo and put it on your page. Spread the wealth. Spread the info.”

Dear Crissy. She asketh for a show of hands for those followers that liked auto-DMs; crickets.

“Unless you want to give your followers an immediate sensation of disgust, and an overwhelming urge unfollow you, I recommend putting the brakes on auto DM’s completely.”

Nicholas Cardot. He revealeth the secret to highly effective auto-DMs. In all caps.

“DON’T AUTO MESSAGE YOUR TWITTER FOLLOWERS. … DON’T EVER DO IT!“

I’m not saying anyone who uses Twitter auto-DMs is going to burn for all eternity, just that maybe they might want to rethink that networking strategy.

If I missed a meme or commandment post, feel free to drop it in the comments.

Photo credit: Justin Parks, who bequeath us that great picture.