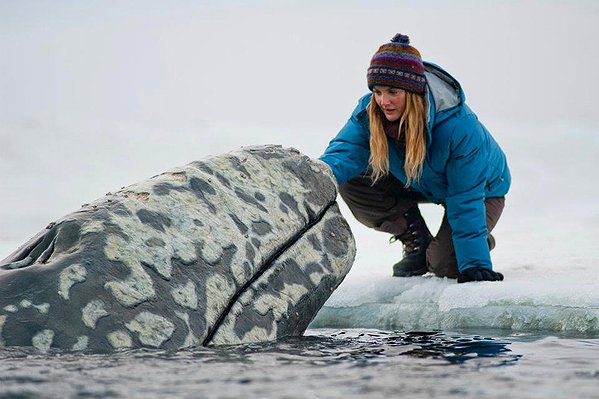 Interesting if simple feel good movie, I thought Big Miracle did a decent job of showing what “PR” (public relations don’t you know) really does or is. Spoiler alert – which may be unneccessary in an ‘inspired by real life’ movie but I’m adding it anyway – I’m going to give away big parts of the movie.

This isn’t a review: not discussing the acting, the cookie-cutter characters or how bad I thought Drew Barrymore’s hair looked. “PR” and in ways, ‘social’ was all over this movie (much like the modern-day Dolphin Tale) .. so I thought it’d make for a different kinda post.

There wasn’t any social media in 1988. No blogs, no Google, no Citizen media armed with iPhones and YouTube. Media gatekeepers did the filtering.

There’s a telling scene in the movie in which the evening news editor is deciding on what ‘filler story’ gets the last spot, typically something ‘human interest’ flavored. Better than war or jobs, whales sell. Ratings FTW!

Once national interests are piqued, everyone gets involved. The story goes ‘viral’ with impact on different groups, stakeholders ranging from school children to small business entrepreneurs to TPTB at the White House.

Greenpeace is the principle supporter of the whales (and antagonist of the business), first getting spurned by the Governor when asking for help. But once the public support is on the whales’ side and the Governor is pitted against them, he’s quick with the press conference to show he’s changed his tune.

As is Big Oil, overtly doing this for the PR value; smile for the cameras as they realize good PR is good for business. Once the whales catch the eye of the White House, the politicians step in and use the military to help the whales as a means of 1) wrap up the Reagan administration with a bigger, shinier bow and 2) pass some of that ‘tree-hugging’ benevolence onto the voting public.

Local eskimos (and whalers) were the interesting group, who stood their ground fairly well vs. the Greenpeace rep. Showing great PR acumen was the wise old grandpa, who assured the others that no matter how well they make their case, “all anyone would see is blood” as he convinced them to help the whales.

Media. I liked how the story is ‘localized’ by kids, schools, business owners hundreds of miles away; smart publicity tactic.

I totally loved that once the story got even bigger, it’s pulled from a junior reporter and given to one more senior, presumably based on his ‘influence.’ But then, he’s outflanked anyway because the cub reporter has the relationships and is more connected to the key players.

All these sides collide in some odd strategic alliances and the message is kept as simple as possible: help the whales or they die. In true Hollywood fashion, life surpassed art and threw in some wrinkles:

The movie showed how the different groups stayed on message, while each telling their own version of the story via a little savvy media relations.

Movies like Glen Gary, Glenn Ross or Thank You For Smoking (fave!) have gotten it right before but it’s rare. At a time when PR is misused, misdefined as just publicity and stunts (ala Sex and the City), it was nice to see a more accurate – if ‘tweaked for Hollywood’ – portrayal of the many different aspects of public relations.

If you see the movie, let me know what you think.